Warm wishes from Navayan.com team to all specially to our females who got freedom from 'Manusmruti' - book which teaches anti-eauality in religion, gender, social, political, economical and what not... the list is quite big.

On 25th December 1927, Modern Buddha Dr. Babasaheb Ambedkar and his followers burnt the 'Manusmruti' and gave freedom to our mothers and sisters who were being a slave. The freedom was not only of female's but of Untouchables as well.

It was the Caste-system which was (and is) dividing India into several nations called as 'Caste are the nations within nation!'. 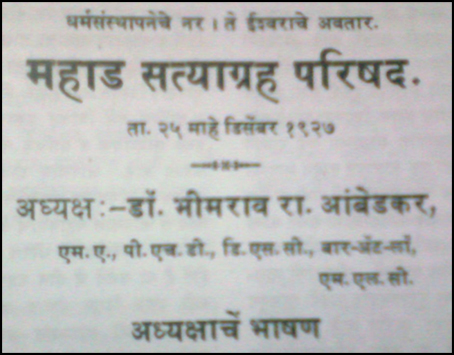 The complete details of 'Mahad Chavdar Lake' Conference and the struggle was published on 3rd February 1928 in 'Bahishkrut Bharat' quartly, (one of Ambedkarite periodicals started by Dr. Bhimrao Ramji Ambedkar in 1927). The compiled periodicals has been published by Govt. of Maharashtra namely 'Dr. Babasaheb Ambedkar Yanche Bahishkrut Bharat and Mooknayak' and details of Mahad revolutionary event is on page 157 to 185