3 January 1831 is an anniversary of the Great Educationist of India Bodhisattva Rashtramata Savitribai Phule. 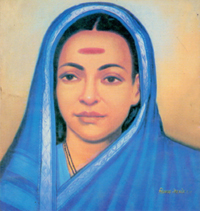 Savitribai was the teacher who educate all females and all untouchables of India.

Whether we called 'Guru' or 'Sir' or 'Madam' to our teacher, they were, are and will continue to be our guide. They help us in our overall development. We should always be thankful to them for their constructive work. 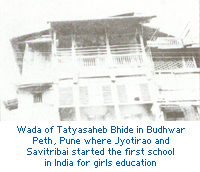 Building the schools by their own strengths, to spread the education among all the castes and communities, was a very difficult task. And when we talk about this in Indian scenario, we should always be aware how difficult it is in today's date also. The contribution of Bodhisattva Rashtrapita Jyotirao Phule and his wife Savitribai Phule in education field is countless! If Jyotirao and Savitribai didn't worked for our mother's and sister's education, possibility that today's generation could be the 'Generation of un-educated people' and India could be called as 'Un-educated India'. Because if a mother is an educated, her entire family will be educated!

Those who forget the history or knows the history but not ready to accept it due to their 'caste-feelings', they are curse to Indian society. In Marathi language there is a very good phrase 'खाल्ल्या मिठाला न जागणे'!

In 1962 Indian government announced to celebrate 'Teacher's Day' on 5th September. After going through the life sketch of Dr. Sarvapalli Radhakrishnan we do not get any idea about his contribution in education and educating to all castes and classes in a large amount (check this). Becoming a diplomat or politician or Vice President or President or mere visiting the functions of schools and colleges or giving permission to celebrate own birthday as a teacher's day, doesn't mean that it should be celebrated as 'Teacher's Day of India' by the masses. Fact is true teacher never says that one should celebrate their birthday as 'Teacher's Day'!

Savitribai never got the respect in her entire life from Indian society (some honored exceptions!) when she was alive and struggling for educating females and untouchables without any help. Now because we know her life, her efforts and her contributions in education and social development, its our duty to spread these facts and to remember the Great Educationist of India!

Lets celebrate the 'Teacher's Day of India' on every 3rd January as it was already started celebrating by Indians since four decades.

HAPPY TEACHER'S DAY OF INDIA TO ALL!!!